Coronavirus, Religion, and Vigilantism in the Nigerian City of Jos 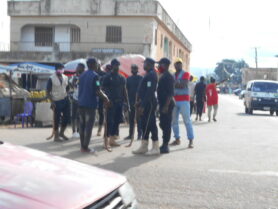 Jos is one of the largest cities in central Nigeria and serves as capital of Plateau State. The emergence of coronavirus as a national health crisis caused both the federal and state governments to enact social distancing regulations. Similar to other states in Nigeria, on the 9th of April this year, the Plateau State governor imposed a total lockdown of the state. The lockdown order halts all movement of individuals and vehicles except for security personnel and health workers. The state government, knowing that the police did not have sufficient personnel to enforce the lockdown and social distancing regulations, summoned the intervention of vigilante groups. The coronavirus-induced lockdown and social distancing regulations have transformed the operations of vigilantes from a night patrol informal security force into visible agents occupying the physical spaces of the city and controlling the movements and behaviors of local people. For the first time since their formation, vigilante groups are being entrusted by the police to control the entire city day and night.

Before the coronavirus lockdown, vigilantes were interested in fighting criminals and adjudicating special civil cases brought to their offices for conciliation or redress. The outbreak of coronavirus has considerably expanded their scope of governance, entrenching them in public spaces in the city and rendering them an instrument for the securitization of the pandemic. Vigilante groups have established structures on the ground that enable them to become potent agents for the enforcement of new government regulations. They command these structures – which have been cultivated over time, and include among others loyalty, authority and legitimacy – from their respective communities. Vigilantes are not only enforcing the lockdown, but also looking for strangers and travelers who return from other states particularly epicenter of the pandemic such as Lagos and Kano. Even though inter-states travel is banned people still find ways to travel usually by bribing the police. Coronavirus has induced fear of strangers due to the suspicion that they might be infected by the virus.

The loyalty and respect enjoyed by the vigilantes till now is being seriously tested, however, as a result of their involvement in enforcing the lockdown. People do not like the lockdown because it has seriously affected their means of making a livelihood. Most people in Nigeria work in the informal sector of the economy and their income hardly lasts more than a few days. Many of the people that I talked to expressed concerns that lockdown is making them hungry and affecting them psychologically. People are facing difficulties adjusting to the new normal of staying at home. Some pointed out to me that their environment, which is constituted by poor housing, is not conducive to a sedentary lifestyle. The psychological challenges of a sedentary lifestyle are aggravated by poverty due to the severe effects of the lockdown on the economy.

The effects of the lockdown and social distancing regulations are not limited to the economy, but have also affected religious gatherings, particularly during the month of Ramadan when Muslims engage in numerous congregational prayers. Many Islamic religious leaders and lay followers agree with the government and health workers that congregational prayers need to be suspended in order to slow the spread of the virus. They argue that the Prophet Muhammad advocates for measures of social distancing and travel restrictions during an epidemic outbreak. However, notable and influential religious leaders such as Sheikh Sani Yahaya and Sheikh Ahmad Bamba have publicly opposed the restriction of religious gatherings imposed by the government.

Sheikh Sani Yahaya, who leads Izala, one of the largest religious organizations in West Africa, goes to the extent of declaring those who comply with the new rules, especially during Ramadan, as apostates. He states that since Ramadan is a sacred month and is vital to the salvation of individual Muslims, prohibiting collective worship in this important period is unacceptable to any good Muslim. He further stated during a press conference that “we do not elect our leaders for them to crush our businesses or to ban us from going to mosque.” One of my interlocutors, an imam of one of the Izala mosques in Jos, stated that “the worst thing is banning Friday prayers, tafseer and tarawih during Ramadan. Let me tell you that staying at home is a disease, not going to mosque is a disease, these diseases are worse than coronavirus.”

Vigilantes who are entrusted by the government to enforce these strict regulations bear the brunt of this anger and many people have begun to change their views of vigilantes, from protectors against miscreants to accomplices in the suppression of religious worship. In one incident, the attempt to enforce social distancing rules during a religious ritual almost degenerated into violence. As a result, the government relaxed the rule of social distancing for the five daily ritual prayers, on the condition that the number of people allowed to pray in a mosque be limited, that some meters of distancing between the worshippers be maintained, and that all worshippers should wear face masks and wash their hands before entering the mosque.

The new rules pose serious problems concerning compliance. According to the Vigilante Group of Nigeria (VGN) commander of Ibrahim Katsina Ward, the Zawiyya and Yan Masara mosques failed to meet the new requirements of providing sanitizer and limiting the number of worshippers. As a result, vigilantes closed the two mosques down. Some of the worshippers became angry that vigilantes had closed down their mosque, while they had allowed other mosques in the area to stay open for prayers. Some members of the closed mosques mobilized youths with machetes and clubs to open the mosques by force, even if it meant fighting the vigilantes. Fearing that the problem would degenerate into bloody violence, the VGN commander summoned the elders of the ward and explained to them that they had not intended to ban prayers but only wanted the mosques to follow the regulations laid down by the government. The commander explained to these elders that other mosques in the area that had been allowed to remain open had fulfilled the social distancing requirements. The elders organized a dialogue between the mosque committees and the vigilantes, and the issue was resolved, with the mosque committees promising to follow the new regulations.

The participation of vigilantes in enforcing lockdown and social distancing regulations has transformed perceptions of these groups among residents in Jos. A considerable number of people do appreciate the participation of vigilantes in enforcing the lockdown and certainly prefer them over the police. However, some perceive the vigilantes as government instruments for securitizing the coronavirus pandemic, which has induced economic hardship and the suppression of religious freedoms, particularly during the month of Ramadan. Muslim vigilantes in Jos have in the past co-opted Islamic religious elements in order to enhance their authority, legitimacy and integrity, which placed them in opposition to the seemingly corrupt police. However, their participation in enforcing the new coronavirus regulations has changed how many people perceive them, particularly in the face of allegations of bribery and the closure of mosques. However, this new perception may be transitory since lockdown and social distancing regulations may not last for a long period of time.