Trouble During the Covid Lockdown: Health and Security Challenges in Lagos, Nigeria 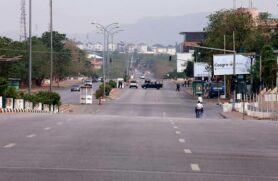 The emergence of the corona virus with its attendant destruction, loss and setbacks, shocked the entire world, including Nigerians from all parts of the country. Nigeria joined the rest of the world in their attempts to deal with the pandemic after the country recorded its first case with the entry of an infected Italian businessman who flew on a Turkish Airlines flight from Milan to Lagos on February 24, 2020. Though it was quickly confirmed that the man was infected, he had met a lot of people for about two days and, as a consequence, Lagos became the epicentre of the disease in Nigeria with a daily increase in the number of infected persons. Up to the early part of 2021, when some of the restrictions implemented during the first lockdown were eased, the state alone accounted for 35% of the total infections and 21% of the total casualties recorded in the country.

To curb the spread of the virus and decrease the number of infected persons, the Federal government inaugurated the Presidential Task Force (PTF) on March 9, 2020. The PTF, headed by Boss Mustapha, the Secretary of the Government of the Federation (SGF) of Nigeria, consists of several Ministers and medical experts representing bodies such as the Nigeria Centre for Disease Control (NCDC) and World Health Organization (WHO). Together, they were in charge of presenting the public with regular briefings and updates on Covid-19 in the country and the measures taken to minimize the spreading of the virus.

Measures taken by the government included: social distancing, use of hand sanitizers, wearing of face masks in public, closing of schools, restaurants, and night clubs. At the peak of the spread, the government introduced a lockdown to restrict movement of people. The initial 14-day lockdown started in Lagos, in the Ogun states and in the Federal Capital Abuja at 11:00 on Monday 30, March 2020 as announced by the President, Muhammad Buhari in a nationwide broadcast. Thereafter, other states were followed. During the lockdowns, some organizations were exempted from the restrictions. Those that render essential services and duties, such as health workers, farmers, telecom officials and service providers were permitted to continue their regular work.

During the lockdown, the residents of Lagos faced untold hardship since the majority of them work independently as unskilled laborers but now could not go to work. The economic downturn hit many artisans, entrepreneurs, private workers and laborers who normally step out to fend for themselves and their dependents on a daily basis. Many who work at private companies and schools were offered half a salary or received nothing. Some households were left with nothing to eat and those who still had some means turned frugal, because they did not know what tomorrow would hold for them.

In response to the restrictions, residents sought alternative ways to earn an income. Since commercial buses were not allowed to operate during the lockdown, many of those with private cars turned to use their vehicles for commercial purposes to in an effort to maintain their families. However, they were confronted by the widespread corruption that presented additional difficulties to their struggles. For example, one of my interlocutors who turned car driver during this time, related his ordeal with officers of the Nigeria Police Force. He recounted that on a trajectory of approximately 4 kilometers, he come across not less than 3 police roadblocks, where he needed to bribe the police officers with a significant amount of money before he could pass, otherwise, the incident could result into his arrest or delay. All motorists operating either as commercial or private, without an official pass or tag from the Presidential Task Force (PTF) and the Nigeria Police Force experienced this horrible situation. This scenario amongst others supports the claim that the Nigeria Police Force is one of the most corrupt forces in Africa.

Lagos is the commercial hub of the Nigeria, and as such attracts a lot of migrants from diverse ethnic groups and cultural affiliations. The city’s increasing population during the past decades has turned it into one of the largest mega-cities in Africa. The hardship experienced by Lagosians during the pandemic became unbearable as the quantity of palliatives provided by the government did not suffice to adequately support the teeming population. At some point, a group of youngsters on patrol discovered warehouses filled with covid palliatives. Once the word had spread, an angry mob ransacked the warehouses. The people that participated expressed deep offence and anger because the government had hidden medical supplies to treat covid patients, while these should have been distributed among the people in dire need of them. One of the attacks concerned the privately-owned warehouse in the Mazamaza community. The state Commissioner for Agriculture denied it was a government owned facility and stated that the items looted were donated by the private sector Coalition Against Covid-19 (CACOVID).

During the lockdown, police forces withdrew from many urban areas because they were reluctant to engage with the public in fear of the virus. As a result, many people expected an increase of the crime rates in the city. Nevertheless, that was not strictly the case. In general, urban communities developed bottom-up security measures throughout the lockdown to project their communities against external attacks, crimes and threats.

During the first period of the pandemic, groups of young boys with ages between 12 and 21, known as “Awa Wa Boys” and “One Million Boys”, were reported to have committed a series of crimes, ranging from rape and robbery to theft and killings. While these boys were known for their nefarious activities before the pandemic, during the pandemic, their activities became more frequent and intense. Since the start of the pandemic, they attacked different neighborhoods, ransacking entire areas and causing injury while they carted away the looted materials.

News of their activities soon reached everyone, which prompted residents to keep vigils in almost all the nooks and crannies of Lagos. Landlords and community elders called on the youth of their neighborhoods to come out en masse and keep watch in their community. To defend their turf against the notorious boys, the youngsters showed up at the midnight with different kinds of weapons such as cutlasses, knives, bottles, and sticks. Some of them used charms to ward off the evil.

Residents could not count on police forces during this period since there were not enough officers to enforce the lockdown and, at the same time, secure all the urban communities. However, some of the urban centers such as Surulere and Ikoyi axis of Lagos, did receive the support of the police forces that were positioned at strategic locations to respond to potential distress calls by the locals at any point in time.

The uneven dispersion of police patrols in the city exacerbated the unequal urban risks. In several densely populated urban areas, such as Mushin, Bariga, and Somolu, local youngsters responded fiercely when word spread that “Awa Wa Boys” and “One Million Boys” were on the streets in their neighborhoods. In response to their presence, multitudes attacked these Boys and many fled for fear of their own lives.

Less than three months after the nationwide lockdown, the nation witnessed a chaotic manifestation staged by prominent activists and celebrities who campaigned against police brutality, corruption and bad governance. The disenchanted youth appeared to suffer from the restiveness built up during the months of lockdown, particularly because the schools were under lock and key. Initially, the protesters specifically targeted personnel of the Special Anti-Robbery Squad (SARS), a unit of the Nigeria Police Force known for their extra-legal use of force, their intimidations and their habit of extorting money and other valuables from their victims. As a result of their practices, Nigerian youngsters had become afraid to go out carrying their cell phones in public or dressing in styles that would likely aggravate SARS members. One case that exemplifies the abuse of this special police force, concerns an alleged car theft. A man who was arrested for purchasing a stolen car was detained for days without trial. What he did not know was that the SARS officer who had arrested him had made a prior pact with the seller, allowing them to make money and re-confiscate the car. After his release, the man saw the officer who had detained him driving his purchased car on two different occasions. It took an intervention of a senior officer who was a close friend of the victim to get the car back.

The two major gathering points where the protesters met were the Lagos State Secretariat in Alausa and the Lekki toll gate. While the government was able to disperse protesters at the State Secretariat, they were unable to achieve the same at the Lekki Toll Plaza. After 10 days of protests, hoodlums that had mingled with the protesters started assaulting police stations, private property and public facilities. In response, Governor Babajide Sanwo-Olu of Lagos imposed a 24-hours curfew on October 20, 2020, a day after the Edo State government also installed a curfew because there had been a jailbreak during one of the demonstrations. Some people speculated that to enforce the curfew and to disperse the teeming protesters at the Lekki Toll Plaza, the Nigerian military fired with live ammunition at the protesters, massacring many peaceful protesters. The state government and the Nigerian army have denied this allegation and challenged those who spread the news to come up with evidence to support their claims. True or false, the Lekki Toll Plaza was completely demolished after the government imposed the curfew and many people were killed or injured. The aftermath of the showdown affected the Palace of the Oba of Lagos, a traditional ruler whose Staff of Office, a symbol of authority, was carted away, his properties looted or destroyed. Approximately 17 Police stations and 80 BRT buses were set on fire during the #endsars protest. Another facility that was attacked was a TV station presumed to be owned by Asiwaju Bola Ahmed Tinubu, a former governor of the state and a leader of the ruling party All Peoples Congress (APC). I witnessed the looting and vandalization of banks and stores at the junction of Bode Thomas Street and Adeniran Ogunsanya Street – a luxurious urban area in Lagos – in broad daylight. People came from near and far to partake in the looting. Some even arrived with vehicles to transport the looted items.